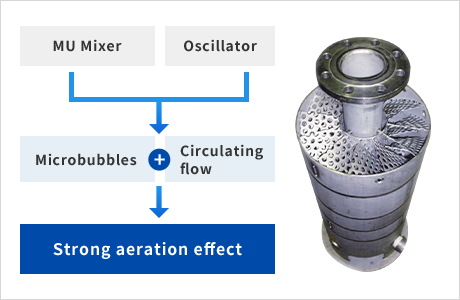 1.1 What’s “MU Green Reactor”?
MU Green Reactor generates a large volume of microbubbles through the synergistic effect of the MU Mixer ®, a high-performance static fluid mixer, and MU Oscillator, and creates a powerful mixed gas-liquid circulation flow through the Oscillator.
This aerator uses a static fluid mixer that efficiently supplies oxygen in air to liquid by generating microbubbles and strongly circulating the liquid in an aeration tank 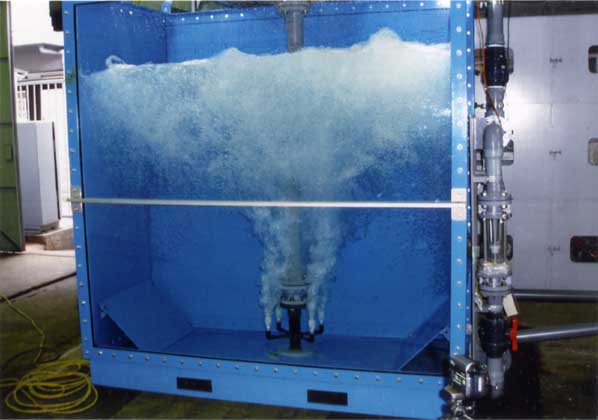 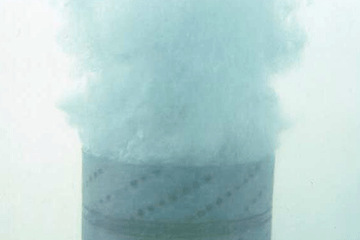 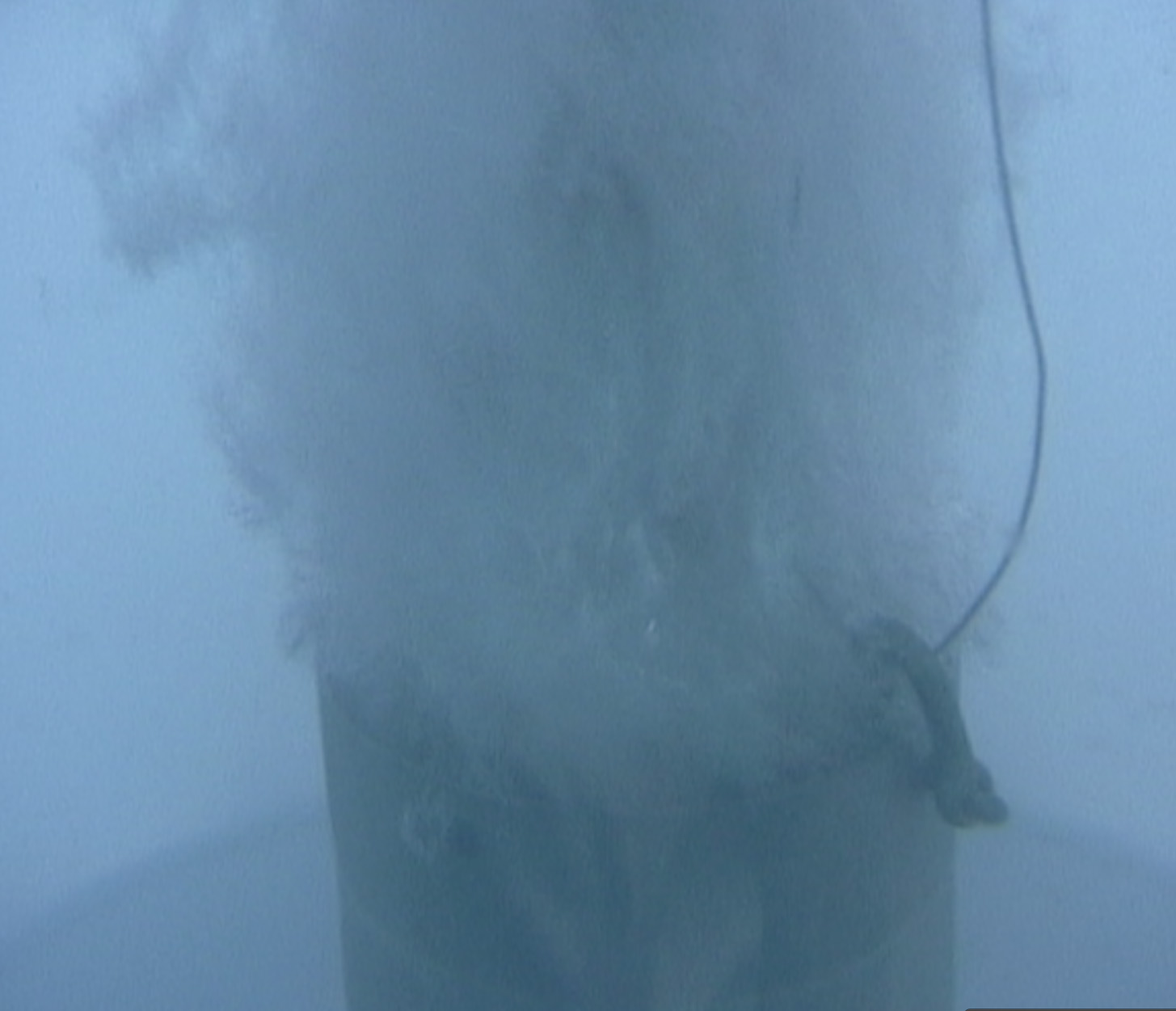 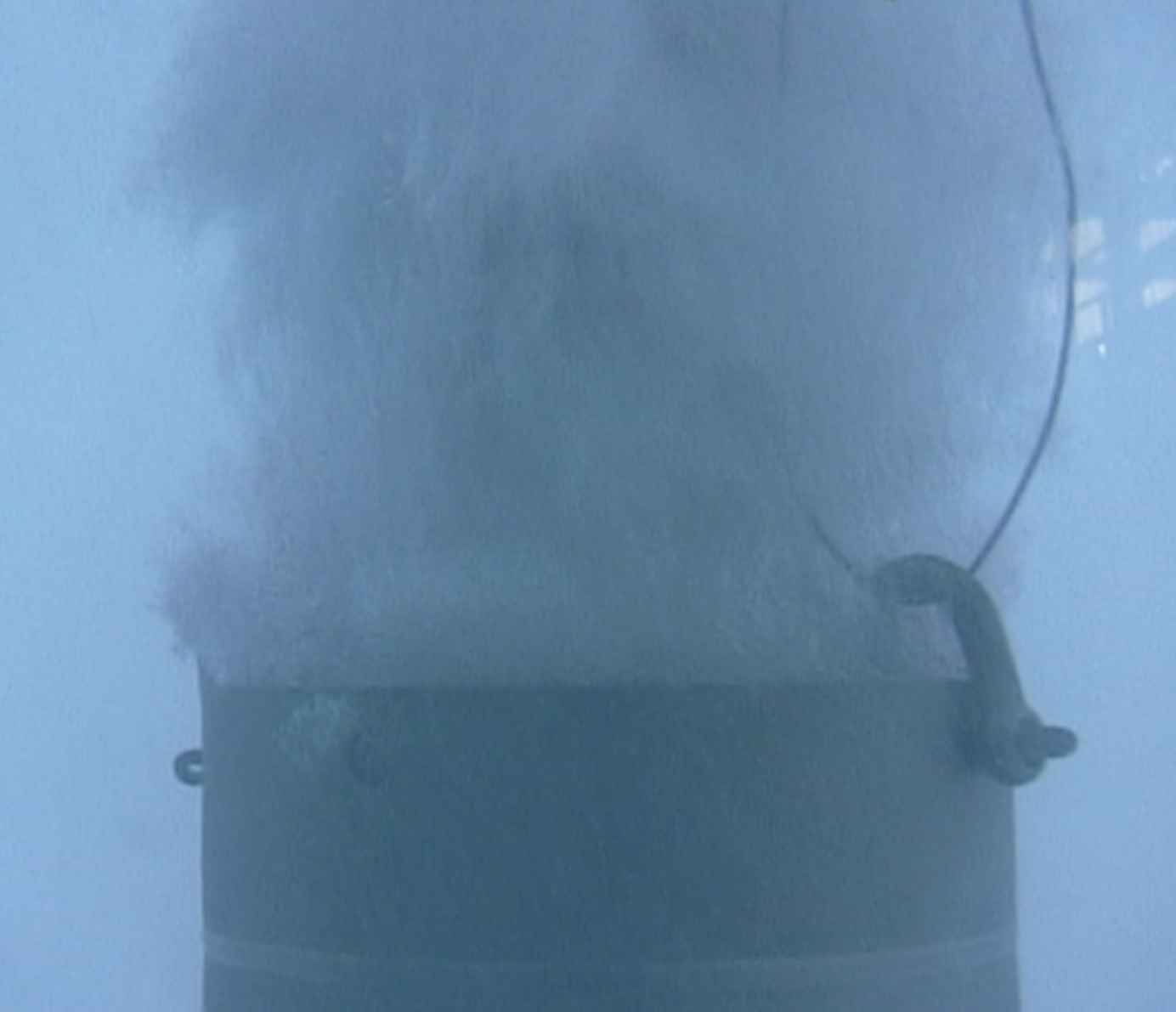 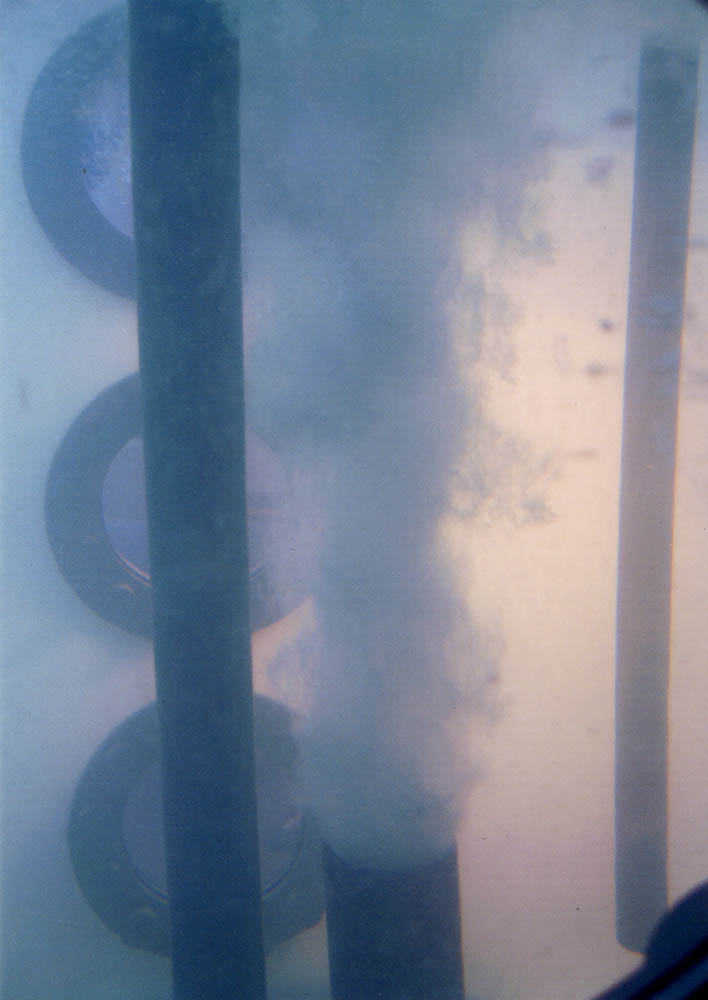 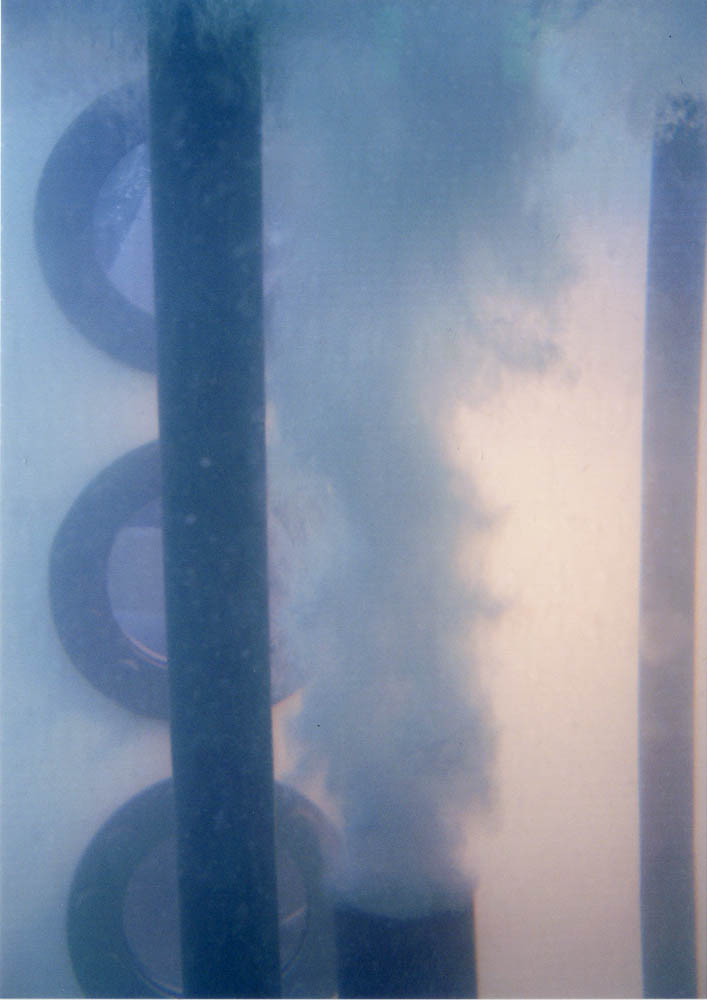 Principles of the Product

The product has a cylindrical shape, and compressed air sent from the bottom is injected into liquid at a high speed of 10 m/s or more upward. MU Oscillator is attached to an injection part, and gas injected from the Oscillator flows through MU Mixer inside the cylinder from bottom to top.
The injected gas passes through MU Oscillator and MU Mixer and is subjected to swirling, multi-division, shearing, merging, and inversion to generate microbubbles. In addition, this product circulates liquid in a tank, so oxygen is supplied to the entire liquid in the tank evenly. 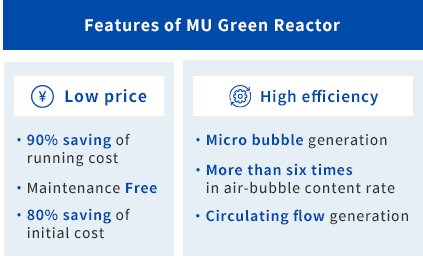 Conventional powered microbubble production equipment requires a compressor for feeding compressed air, a mixture pump for gas-liquid mixing, and a pressurized water pump for supplying liquid in an aeration tank. MU Green Reactor, however, requires only a roots blower or compressor. Mixture pump for gas-liquid mixing and pressurized water pump are not required. The running cost of this product can be reduced by more than 90% of that of a powered model.

Powered devices generating microbubble agitates the fluid by rotating liquid and gas, pressurized in the mixing pump, with impeller, which crushes gas and liquid to dissolve gas in liquid. MU Green Reactor, which contains complex flow channel inside, dissolves gas by dividing, swirling, merging, and reversing the fluid with only the flux energy of gas. Because there are no moving parts in the equipment, there is no wear or clogging of moving parts such as blades and bearings, and maintenance costs can be kept to zero. It is also highly durable and can be operated continuously for a long time.

MU Green Reactor generates microbubbles by simply passing the fluid through a channel for fluid, forming a strong circulation flow in a tank, and dissolving oxygen in the liquid. No power-driven pumps are required, reducing the cost of the product. Initial cost can be reduced by more than 80% compared with that of a power-driven pump. The void fraction (volumetric gas flow rate ratio) is 4 to 10 vol% for the powered microbubble production equipment. But it amounts to 50 to 70 vol% for MU Green Reactor. In spite of being superior to powered mixer in terms of generation efficiency and void ratio, MU Green Reactor is far lower than the powered mixer in terms of running cost, maintenance cost, initial cost, and all other aspects. The product has excellent cost performance.

The Kenics static mixer, the original model of the static mixer, has one blade per element, but our product has multiple blades. Increasing the number of blades doubles the division of the fluid within an element, increasing the mixing efficiency of the fluid per element. For example, if four elements with only one blade for each are struck in a row, splits will occur three times and the number of split of fluid will be 16 (= 2 x 2 x 2 x 2). If the element contains 4 blades, the number of divisions is 64 (= 4 × 2 × 2 × 2), which increases the mixing efficiency by four times. For 12 blades, the number of divisions is 192 (=12 × 2 × 2 × 2), 12 times.

There are no holes in a blade of conventional static mixers, but our products use perforated wings. When fluid flows through the perforated wings, the division and shearing of the fluid increases dramatically and the mixing efficiency increases accordingly.

In a conventional static mixer, the flow of fluid in the element was only a spiral flow along the wings. However, in our product, in addition to the spiral flow, a straight flow is added to the center of the axis, creating two flows with different speeds and directions within the element. This difference in velocity causes shearing force, which causes the fluid to vibrate and the fluid to be miniaturized, leading to improved mixing efficiency and the area of gas-liquid contact between different fluids. These three features make mixing efficiency far superior to that of conventional static mixers. To further improve performance, MU Oscillator is attached to the gas injection section located at the bottom of the mixer. The features of this MU Oscillator are as follows.

MU Oscillator is a static mixing device with gas swirling and shearing functions that generate strong spiral. It is attached to the gas injection part and is injected into the liquid from the bottom to the top at high speed (10 m/s or more). Inside the Oscillator, you will see two twisted wings with void at the center in the axis direction.

Pressurized gas emitted from the injection section at high speed can be divided into two flows in MU Oscillator, like MU Mixer. These are the flow spirals along the wings and the flow going straight through the hole at the center in the axis direction. Oscillation occurs due to two different speeds of the swirling flow and the straight flow.

What is the oscillation phenomenon?

In a word, this oscillation phenomenon is the vibration of gas. This vibration has an effect of accelerating the refinement of gas, and is specifically caused by the following four phenomena.

One of the features of this product is that it effectively aerates the liquid in the whole aeration tank by generating a strong circulating flow. Conventional microbubble generators do not generate a strong circulating flow, so only the fluid around the device is aerated. To cover the entire tank, it was necessary to enlarge the device or install multiple devices or underwater mixers. However, by generating a strong circulation flow, the overall reaction speed of the tank, or processing speed, is increased, enabling aeration of a large volume of fluid with small energy, and dramatically improving energy efficiency.

The features of MU Mixer (No.04-06) and the oscillation phenomenon caused by the oscillation element (No.07) have made it possible to realize mixing efficiency and oxygen dissolution efficiency that far surpass the conventional mixing pump and static mixer methods. The void rate of microbubbles is also about 60%, about 6 times higher than the bubble content of microbubbles in a conventional static mixer, which is about 10%.
In addition, the oscillation element forms a strong circulation flow (No.08), and a large aeration effect (oxygen dissolution efficiency) can be exhibited by the synergistic effect of efficient microbubble generation and circulation flow generation. Now, the purpose of a static mixer is to efficiently dissolve gas into a liquid.
In this purpose, microbubbles play a major role. Microbubbles have very different properties from ordinary bubbles. They have the following characteristics, which enable them to absorb and dissolve gas more efficiently than ordinary bubbles. 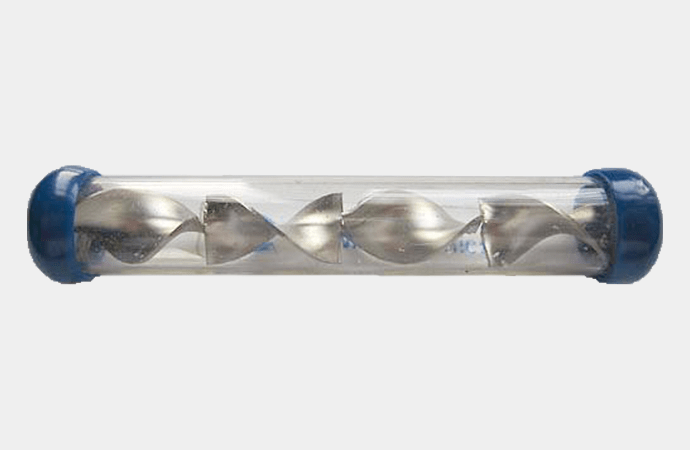 The edges (border) of the right-handed spiral blade and the left-handed spiral blade are perpendicular to each other, so the cross section of the boundary is just a cross. The liquid flowing along both sides of the wing is divided into two flows at the boundary. If N blades are arranged in series, the number of divisions is 2 raised to the Nth power. For example, if there are three blades, 2 × 2 × 2 = 8 divisions.

When multiple wings are connected in series, the helical twist direction of the blades is alternating. If the first blade is clockwise, the next blade is counterclockwise. Turbulent agitation is achieved by changing the direction of rotation for each impeller.

How big is microbubble? Microbubbles are defined as “Fine bubbles of 10 to several 10 microns (μm) at the time of generation.” It is said that the average hair thickness of Western women is about 50 μm.
Roughly speaking, it is a bubble smaller than the thickness of hair. Microbubbles have the following characteristics compared with ordinary bubbles, and contribute greatly to the efficient aeration effect. 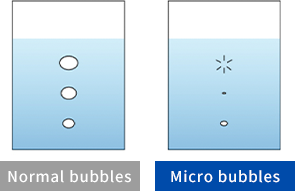 The biggest difference between regular bubbles and microbubbles is that they disappear in water. As shown in the figure above, normal bubbles rise in the water due to buoyancy, and as the water pressure decreases, the internal pressure applied to the bubbles also decreases, the size of the bubbles increases, and the bubbles burst on the surface.
On the other hand, in contrast to the normal mechanism, microbubbles decrease in size as they rise and disappear in water. This is because the surface tension of the water acts on the boundary between the bubble and the surrounding water (gas and liquid), pushing the bubble in all directions. The pressure applied to the bubbles gradually reduces the size of the bubbles, eventually causing them to collapse under extremely high pressure.
Because microbubbles rise very slowly, the effect of surface tension is greater than the effect of change of water pressure, and thus a phenomenon different from normal bubbles occurs. This “Bubbles disappear in water” phenomenon occurs when the surface tension of water increases the pressure inside the bubble and the rising speed of the bubble is very slow.
Let’s take a closer look at the relationship between these two phenomena and “dissolution capacity of bubble.”

According to Stokes’ law, the rise speed of microbubbles is proportional to the square of the bubble diameter. (This relationship holds up to a bubble diameter of 150 μm.) According to the actual measurement data, a bubble with a diameter of 1 mm ascends 6 m in a minute, while a bubble with a diameter of 10 μm ascends only 3 mm. In other words, the rising velocity of a 10 μm bubble is approximately 1/2000 that of a 1 mm bubble. Since the rising speed is slow, the residence time in liquid is long, which increases the time for gas to come into contact with liquid, thus increasing the gas dissolution efficiency.

In terms of Feature 2 and 3, we compare the melting ability of bubbles with diameters of 1 mm and 10 μm. In Feature 2, since the internal pressure of a bubble (= solubility) is inversely proportional to the diameter of gas, a 10 μm bubble has 100 times the dissolution capacity of a 1 mm bubble. In addition, as described in Feature 3, since the rising speed of a bubble of 10 μm is about 1/2000 of that of a bubble of 1 mm, a bubble of 10 μm has about 2000 times the dissolving capacity of a bubble of 1 mm. Simply multiplying the effect of internal pressure (Feature 2) by the effect of rising velocity (Feature 3), the dissolution capacity of a 10 μm bubble is 2 × 10 times 7 or 20 million times greater than that of a 1 mm bubble. In fact, there is no such difference due to various conditions such as the convective effect accompanying the rise of bubbles, but in any case, there is no doubt that it has an incommensurate melting ability. In this way, microbubbles have a much higher dissolution capacity than normal bubbles and can be aerated efficiently. In addition, the microbubbles are charged to negative ions, and as the microbubbles shrink, the ions become more and more concentrated, generating free radicals. Free radicals are highly reactive and can be used for chemical reactions and water purification.
*Reference: “Foam Engineering(泡のエンジニアリング)” (ISHII Yoshio, Techno Systems, 2006(石井淑夫、テクノシステム、2006年)), “Trends in microbubbles and nanobubbles(マイクロバブルおよびナノバブルの動向)” (Masayoshi TAKAHASHI, M&E July 2008 issue(高橋正好、M&E 2008年7月号))

Chart of comparison with competitive products

*Compare with other companies’ diffusers, which are set as 100.

Applications of the Product