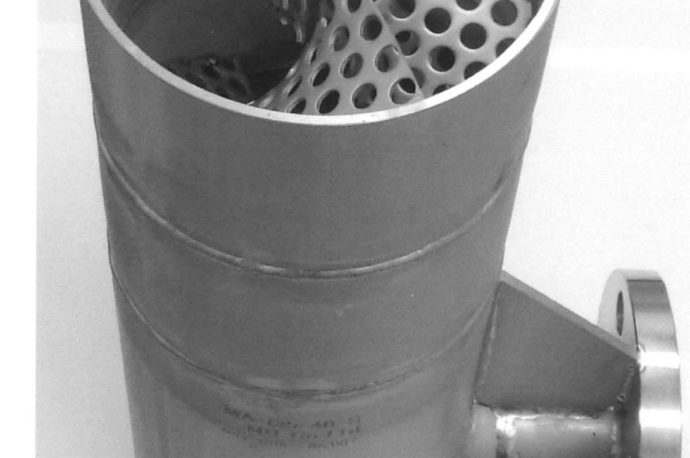 MU Aerator,a small version of our aerators, generates micro-bubbles and circulation flow to efficiently supply oxygen in air to liquid. In the product, are attached several unperforated blades with void at the center in axis direction. The spiral flow along the blades and the straight flow of the center create a shear force that efficiently splits the fluid. Plus, the inlet at the bottom of the unit can generate a circulating flow. It leads to micro-bubbles and circulation flow, but it has simple structure and minimal specifications to keep the price low. It can be used, for examples, for aeration tanks, lakes and ponds, and also for capturing micro plastics. 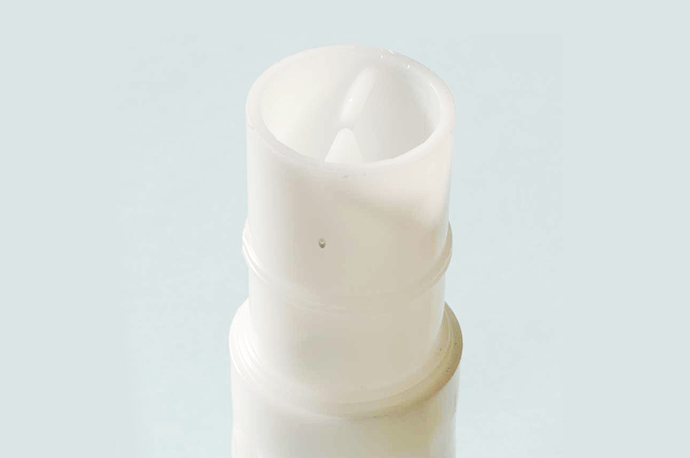 MU Green Reactor is a large version of our aerators. The basic principle of this aerator is the same as that of MU Aerator. This is an a highly efficient aerator that uses static fluid mixer with micro-bubbles and circulating flow. The reactor contains multiple MU mixing elements. The element has several perforated blades are spirally arranged with void at the center in axis direction. As the fluid passes through the elements, it is continuously divided many times, creating micro-bubbles. Circulating flow is also generated by the suction port at the bottom of the device. The product is basically applied to the same as that of MU Aerator, but its high performance and large capacity make it suitable for use in large facility. 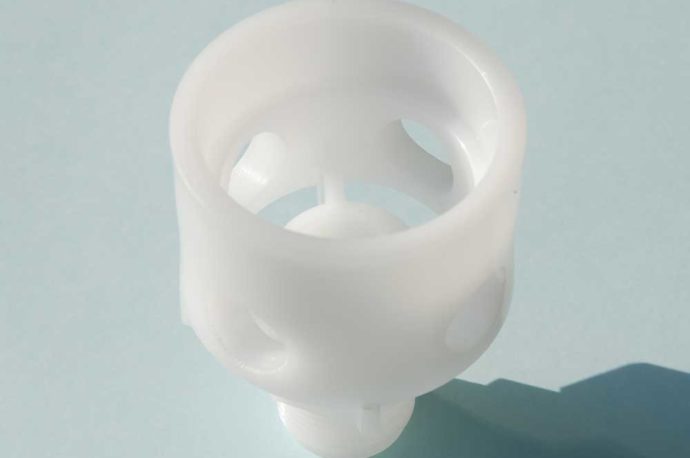 MAH is a simplified version of our aerators. This is composed of the bottom part of MU Aerator and also generates micro-bubbles and circulation flow. In the product, are attached two unperforated blades with hollow of the center in axis direction, like MU Aerator. The spiral flow along the blades and the straight flow of the center create a shear force that efficiently splits the fluid. Plus, the inlet at the bottom of the unit can generate a circulating flow. The air supply is slightly smaller than that of MU Aerator, but it can be made of SUS316 and aluminum as well as PP, and can be used in a wide range of field. 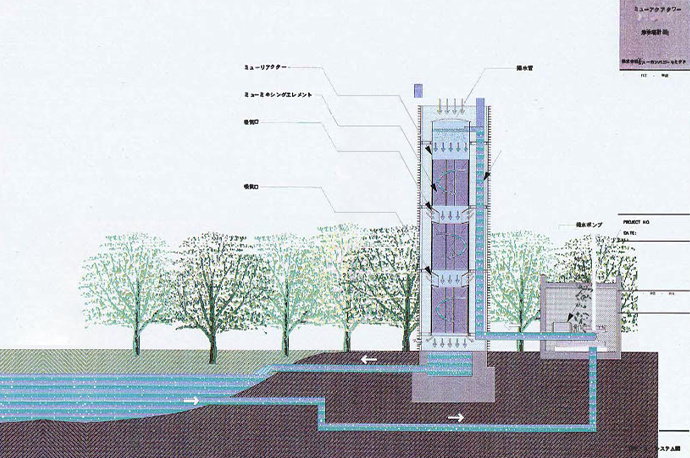 MU Aqua Tower is a stripping tower and inside the tower are installed the same element (MU mixing element) as MU Green Reactor. The fluid is pumped and passes through layers of elements. As a result, the liquid is broken down into smaller particles, and as the surface area increases, a large amount of oxygen is dissolved. An artificial waterfall was reproduced by using only gravitational energy. Like other our products, the device requires no maintenance. This also runs on renewable energy sources such as solar and wind power, and has almost zero running costs. With low cost, high efficiency, and no maintenance, this water treatment system makes the most of the principle of the nature. 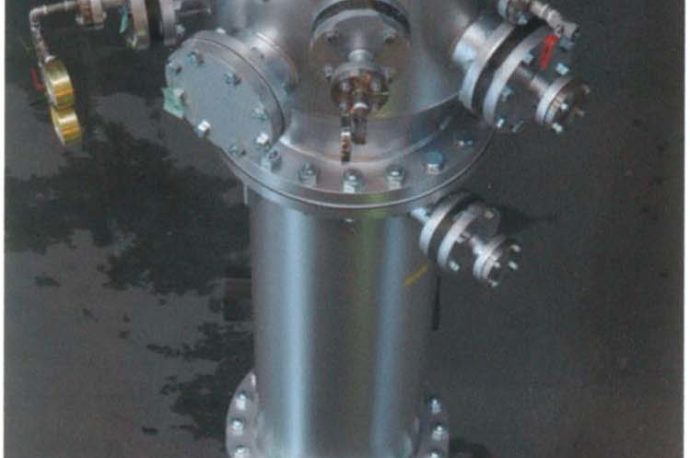 MU Scrubber is a scrubber tower. This wet exhaust gas equipment is based on MU mixing element, our patented component. Exhaust gas and absorbent are passed through multiple MU mixing elements. The exhaust gas and the absorbent are repeatedly and continuously subjected to the stresses of rotation, division, merging, inversion, and shearing with no use of power. As a result, they are in gas-liquid contact, mixed, and agitated, enabling highly efficient simultaneous treatment of gas absorption and dust removal. No clogging and high performance with no maintenance. Parallel flow is also possible, so the flow velocity can be increased and the equipment cost can be reduced. Because of its low pressure loss and high efficiency, it reduces electricity costs. This products are now in use for silane exhaust gas treatment equipment, flue gas desulfurization equipment, wet denitration equipment, etc. 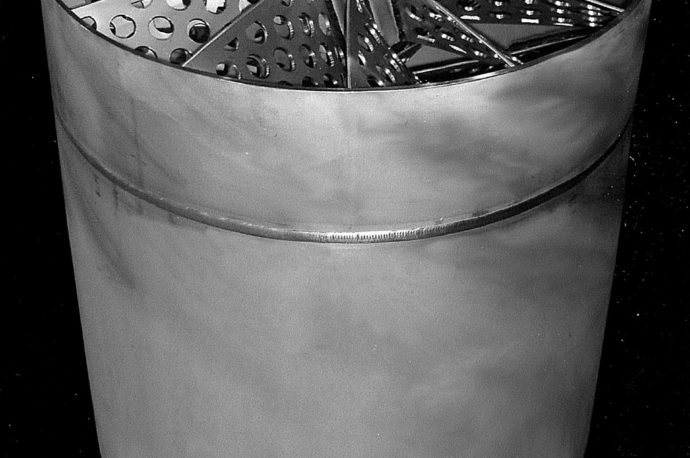 MU Eductor is a large liquid-liquid agitator. The fluid is efficiently mixed by incorporating a spiral perforated blade developed by our company. It also generates a circulating flow to efficiently agitate the entire liquid in a tank. The synergistic effect of the mixing and circulating forces enables efficient mixing, agitation and reaction of the liquid in a tank. Like other our products, the inside of the product remains clean and has no clogging, which means it is maintenance-free, significantly reduces maintenance costs, and enables long-term operation. The reduction in power consumption also leads to energy conservation in a reaction tank. Furthermore, by generating a circulating flow, reaction tank can be scaled up, and the homogenization of the product in the large liquid storage tank can be achieved. 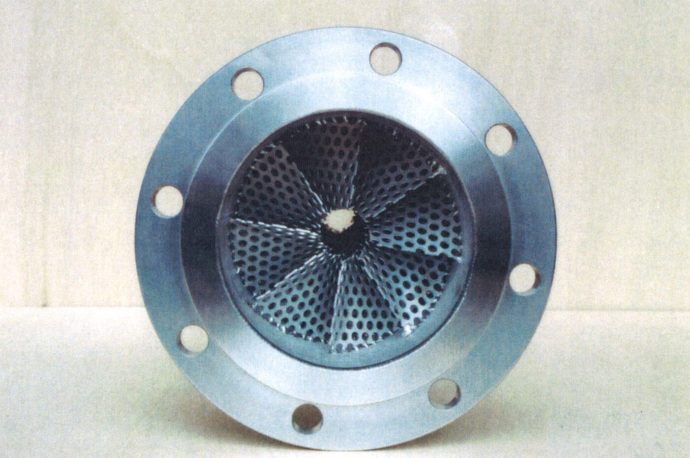 MU Mixer is a cylindrical mixer. This static mixer requires only fluid flow energy and does not require mechanical mixing power. Inside the cylinder, several MU mixing elements are placed. The element has several perforated blades that are spirally arranged, with void at the center in axis direction. As the fluid passes through the mixer, it splits, rotates, shears, joins, and mixes and agitates. Applications include mixing liquids with different specific gravity, viscosity, and temperature, and mixing liquids, gases, and powders. The examples are the production of carbonated water using water and carbon dioxide, the production of ozone water using water and ozone gas, gas-liquid reactions between organic compounds and chlorine-based gases, and sterilization of ballast water.